Richard Goodwin, Los Angeles dog specialist, was the son of Irish immigrants and born in Massachusetts, according to the 1930 United States Census. While he could read and write, he had never attended school.  His dwelling and the site of his kennel, on West Washington Street was rented rather than owned, and only worth $100. His immediate neighbors included a dentist, shipping clerks, carpenters, truck drivers and hotel doormen.  Like Goodwin, none of them were native Californians, and a few had been born in Mexico.

Yet Goodwin made at least some of his income from the array of silent-film starlets, theatrical bookers, radio announcers and others who earned respectable, if not munificent, livings on the margins of  L. A. show business.  From his start with “advertising dogs” on the streets in the 1910s, Goodwin used his connections to create a business breeding, training and caring for their dogs. I have not been able to find any evidence of Goodwin as a dog trainer for silent films, but that doesn’t mean he didn’t have a hand in there.  On January 11, 1929, an article in the Los Angeles Times reporting on the poor health of the Fire  Department’s mascot  Lord Byron assured readers that the bulldog was “receiving personal attention from Richard Goodwin, dog expert who cares for the health of the famous dogs of stage and screen.”

Richard Goodwin’s efforts to make his mark had already gotten him in trouble in 1919, when he was fined for practicing veterinary medicine without a license.  He didn’t give up, however.  Along with his breeding kennel and his proprietary remedies,  Goodwin also tried to make a mark by introducing another service to security-conscious dog owners:  canine nose prints as a way of tracking stolen dogs.  Here is Richard Goodwin taking a nose print of his Boston terrier Sharkey. 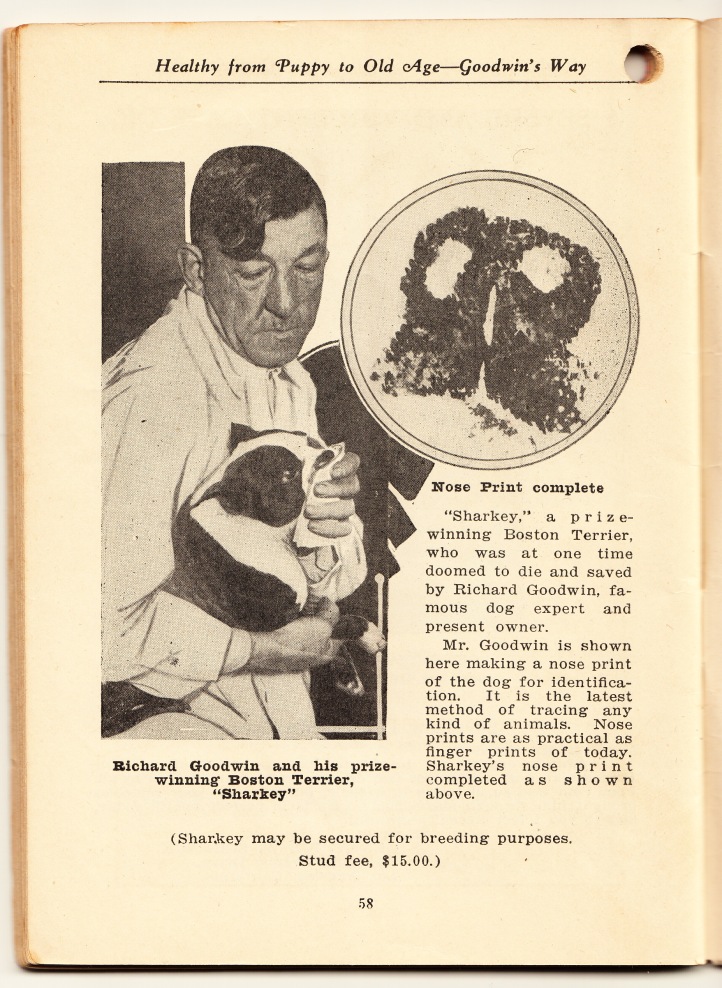 In the 1920s, cattle breeders experimented with taking nose prints, and at least one Los Angeles veterinarian, a Dr. Clark (who I have been unable to trace further for the time being), promoted the idea of a nose-print “bureau” for dogs in 1923.

However, Richard Goodwin had another asset in his quest for success: Louise Goodwin. According to the same 1930 census manuscript, Louise E. Goodwin was a bookkeeper, twenty-three years younger than her husband.  By then Louise, who had been born in Maryland, and Richard had been married for eight years. This photo from Richard Goodwin’s Dog and Cat Book suggests what an asset she was to the operation, with her crimped hair and fashionable dress, and her arm around a chow dog who had recovered from mange.

It is difficult to tell for certain, but Mrs. Goodwin may be one of the dog “laundresses” depicted in six photographs in the collection of the Los Angeles Public Library.  From an anonymous photographer, the undated and otherwise unidentified images feature three young women in white laboratory-style coats printed with “Richard Goodwin Dog & Cat Remedies” washing a Boston terrier, fox terrier puppies and a glum-looking collie at the “Dog & Cat Laundry.”  Whether this is actually Goodwin’s establishment is unclear;  the set-up consists of improvised laundry tubs and a clothesline located next door to a building advertising Goodrich Tires.  I reproduce two of them here.

Why were these photos made? I wonder whether they were taken around the time that Richard Goodwin published his booklet; perhaps they were intended to be placed as light features in local newspapers. I can imagine all kinds of scenarios, But without the lab coats and the hat, these would never have been associated with Richard Goodwin and their purpose remains unknown.

Richard Goodwin’s business seems to have ticked along — until his death at the end of April in 1931.  The Los Angeles Times published a short article on May 2, “Funeral Rites Today for Richard Goodwin.” He was locally famous enough to attract this final bit of attention. The article stated that his kennel had been in business since 1913, which is earlier than my research has been able to confirm but is congruent with the time that his advertising-sign dogs began to ply the city’s streets.  Sometime after that, the kennel seems to have closed.  In the 3 March 1935 issue of the  Los Angeles Times, a classified advertisement under “Business Opportunities” tolled the end of the Richard Goodwin story: “RICHARD GOODWIN Pet Medicines and Formulas is (sic) to be sold at once to close estate. $300 cash.” Poor Louise Goodwin. I hope that she and the remaining dogs were able to live in some comfort after the death of the enterprising dog specialist.