When Richard Goodwin published his book on the care of dogs and cats in 1927, he joined a group of small businessmen — druggists, dog breeders, old-time vets trained by apprenticeship and younger practitioners who attended the growing number of “veterinary colleges” — who made and bottled  their own over-the-counter medicines and remedies for pets.  They all left paper trails in the form of booklets distributed free to points of sale. 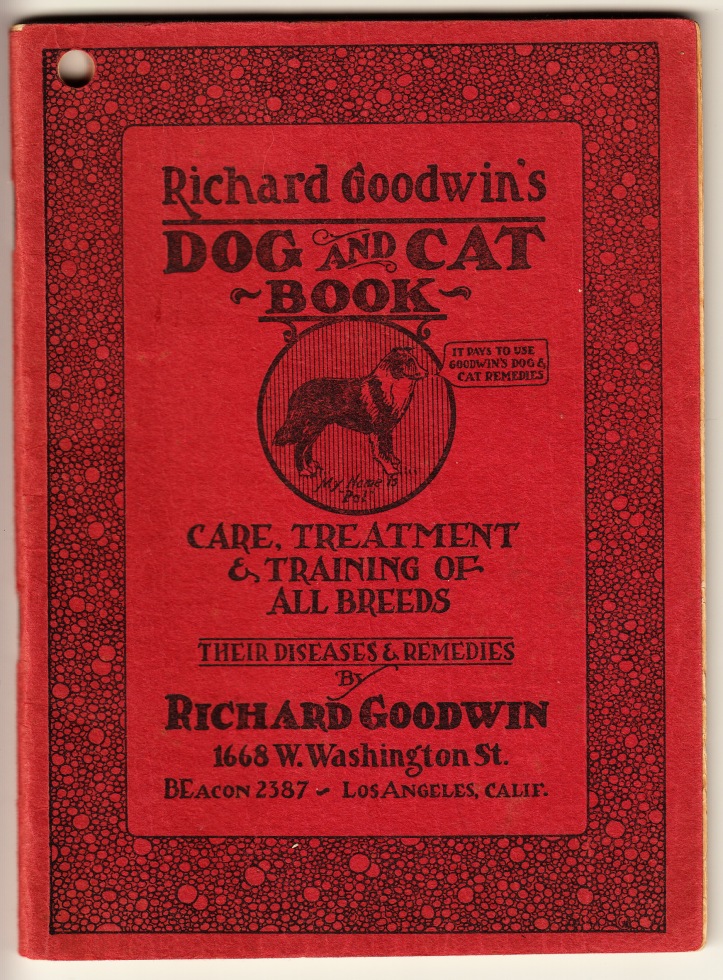 A handful of these fellows —  veterinarian George Clayton of Chicago and the druggist Polk Miller of Richmond, Virginia, for example — published many editions of their advertising booklets; since the point-of-sale is often stamped in a space on the back cover, it’s possible to see where concerned dog owners obtained the remedies. These  texts suggest the presence of worried people dealing with an array of chronic problems — sarcoptic mange, worms, digestive diseases — and infectious diseases like distemper for which there were no effective vaccines.  As I have written elsewhere, most pet owners were their own veterinarians until the second half of the twentieth century.  “Tonics” and “blood builders” for dogs were also common offerings, reflecting the wide use of similar products for people and the uneven quality of the canine diet.  And the core products for any line of dog remedies were the flea powders that I’ve written about in other posts, along with kennel disinfectants using carbolic acid, an ingredient used to clean human sickrooms, too.

“From a Mangy Wreck to a Blue Ribbon Winner.” 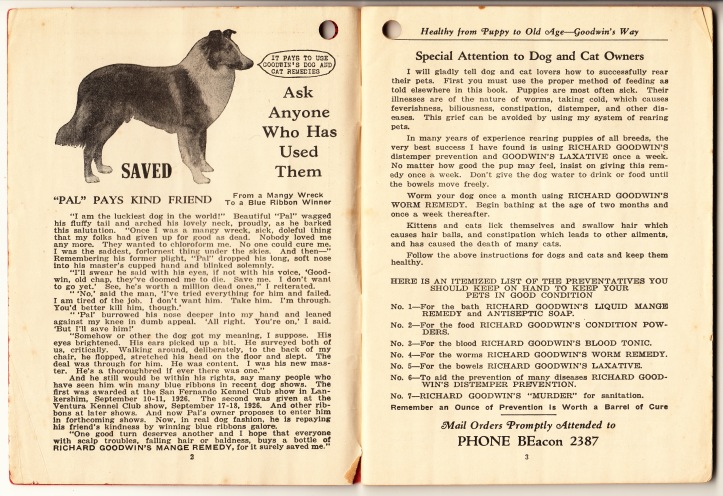 Richard Goodwin offered seven “preventatives” for the pet owner’s medicine chest;  their formulae are unknown, but practical wisdom among pet store owners, dog breeders and early vets probably included exchanging observations on what worked and what didn’t, just as it did among stablemen treating horses.

What sets this little booklet apart from the others is its use of southern California testimonials throughout, and the implication that Richard Goodwin had connections with the growing film industry. Excerpts of testimonial letters are often found in most advertising for dog remedies, but Goodwin doesn’t seem to be interested in a national market for his products.  Along with the story of Pal, above, readers saw proof of efficacy in photos of patients like Fritsie, below, with invitations to visit the recovered patient and actual street addresses for so doing. 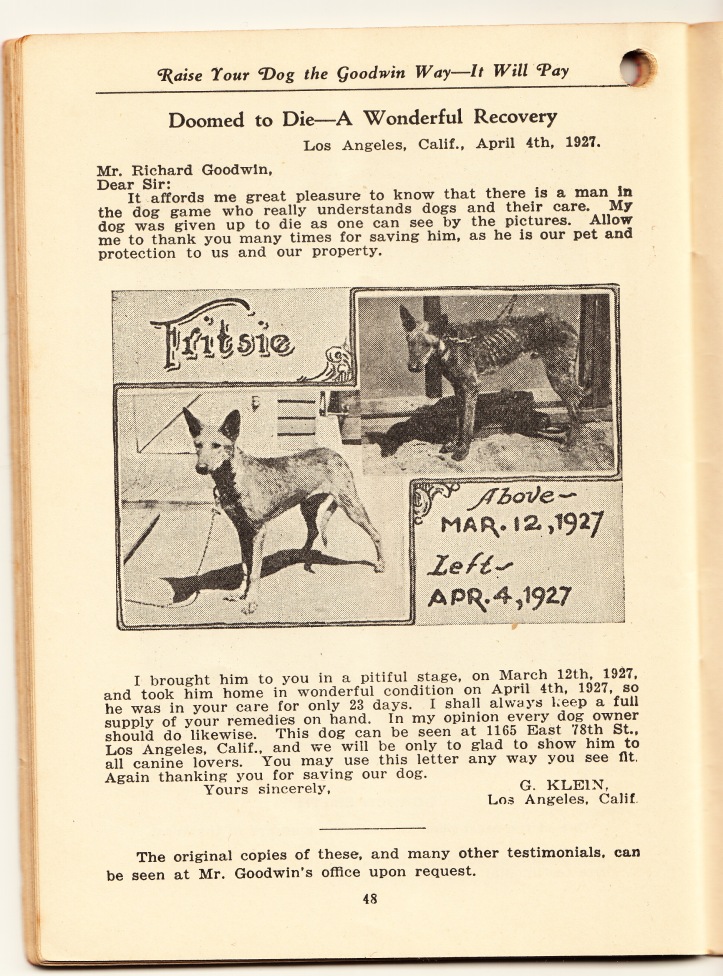 Goodwin also used Hollywood’s preoccupation with stardom, no matter how slight, as a promotional tool.  Phyllis Haber, one of Mac Sennett’s original Bathing Beauties (she worked steadily through the 20s and left the movies to marry a millionaire), got a full page glamour shot  along with her testimonial. 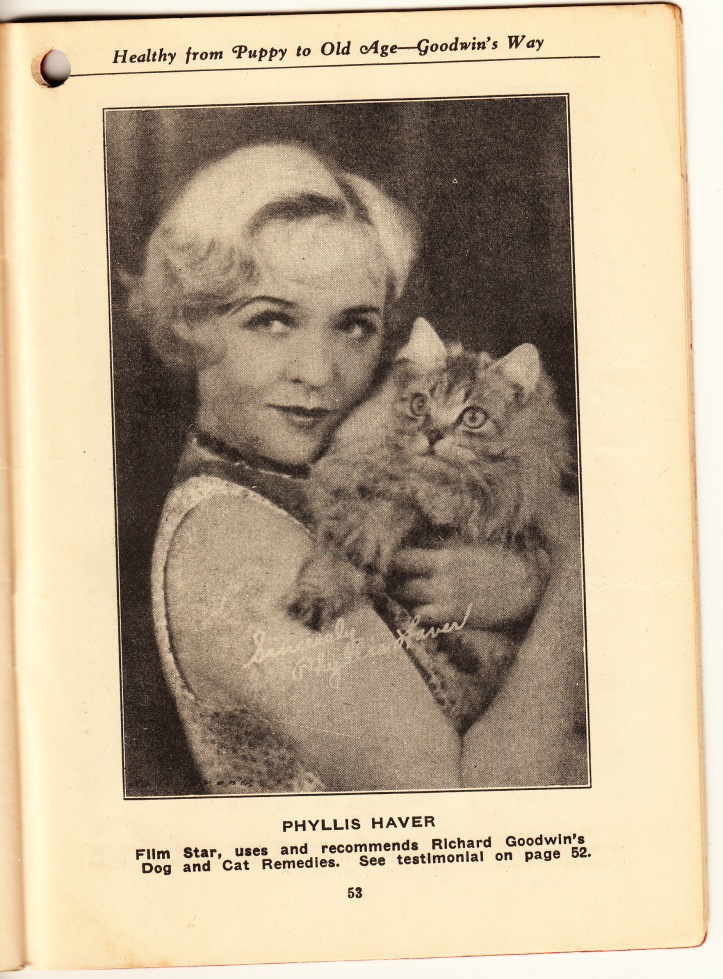 Put together the practical tips such as how to make a homemade flannel coat for nursing a dog with a fever (below); the promotional bluster associated with Goodwin’s own trained “advertising dogs;” testimonials of Californians on the fringes of the growing film industry, and the photos of Goodwin himself as a practical “dog man” in a sharp suit, and you get a glimpse of a pretty interesting life. 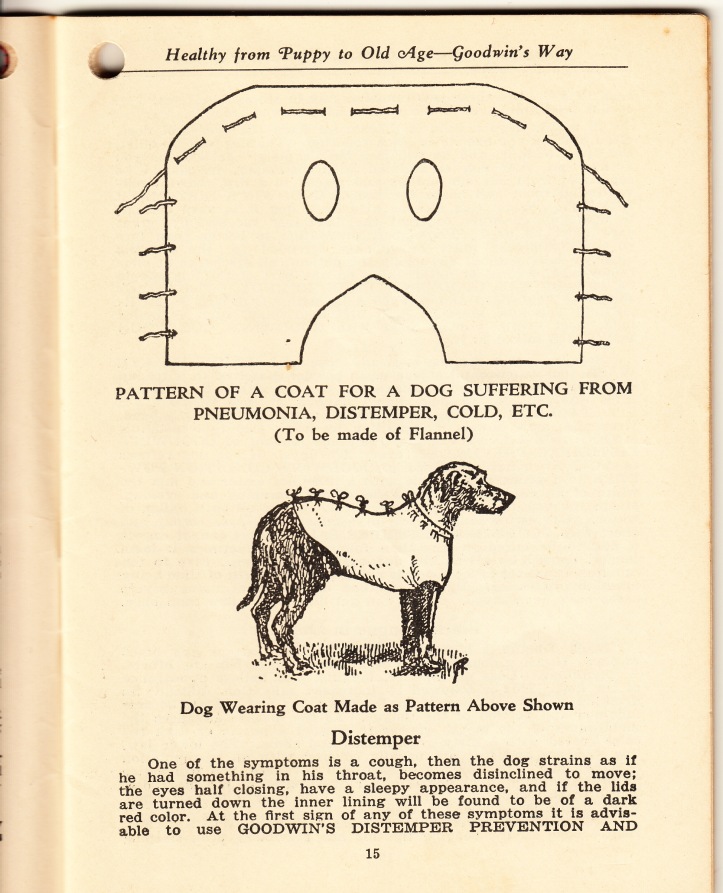 The 1920s was the decade of the new canine movie star, with Rin Tin Tin at the apex of public recognition.  Richard Goodwin doesn’t seem to have been able to capitalize on this directly — perhaps he was didn’t want to.  But there is some unusual evidence of his ongoing preoccupation with promotion.  And the inspiration for this may have been Mrs. Richard Goodwin, who was — as they say — a looker.

Stay tuned for the next exciting chapter….