Sgt. Stubby and Owney the Post Office Dog: The Meaning of Mascots

My friend Bernard Unti recently made me aware of a new animated film Sgt. Stubby: An American Hero.  It tells the extraordinary story of Sgt. Stubby, a Boston bull terrier who followed his newly enlisted owner to France during World War I and, miraculously, survived to return to the U.S.  The website for this film is really wonderful, with lots of activities for kids and materials for teachers and families.

I quote the excellent film website here: “Stubby saw action in 17 different battles and received critical wounds during a chemical attack. When he recovered, his heightened sensitivity gave him the ability to detect incoming attacks and alert Conroy and his brothers-in-arms. He could also discern English from German speech, leading medics to wounded Americans on the battlefield. After catching a German spy in the Yankee Division’s trenches, Stubby was promoted to the rank of Sergeant, the first dog to be promoted in combat.”

The dog lived a long and happy life (he died in 1926) as a mascot for the 102nd Infantry Regiment, marching in parades and having his portrait taken.  He met three presidents and also became the mascot of the Georgetown Hoyas.  He rode on a “Be Kind to Animals” float in a parade organized by the American Humane Education Society in Washington. Conroy lived in Washington, D.C. and, when Stubby died, he arranged for him to be mounted by a Smithsonian taxidermist, who mounted the preserved hide over a plaster cast of the dog’s body.  Scrapbooks documenting Stubby’s life, and the dog’s “uniform” seen in the photo above, were turned over to the National Museum of American History. Here’s a link  to the catalog record for Sgt. Stubby. Nowadays, he is on exhibit as part of the displays about World War I.  (That extraordinary spiked collar he is wearing was actually a pretty common type used on bulldogs.  Its origins are in collars made to protect the throats of hunting dogs centuries earlier, but the spikes and studs were more of a convention by the time Stubby came along.) 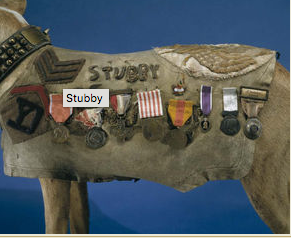 The story of Sgt. Stubby made me think about a second dog mascot, from a generation before Stubby,  whose preserved body is also in the collection of the Smithsonian.  Owney, whose portrait you see below, was a rough coated terrier mix who initially belonged to a mail carrier. Born around 1887, the dog became the mascot of the U.S. post office in Albany, New York.  Owney began to travel with the mail bags of the Railroad Mail Service and logged over 140,000 miles before his death in 1897.  Mail carriers often took him to the photographer for a portrait, sometimes together and sometimes alone, as in this example from Pittsfield, Massachusetts.  Notice that Owney is on a mail bag.

Owney did not meet as happy an end as Sgt. Stubby.  He allegedly attacked a postal clerk and was killed in Toledo, Ohio. (There are several variant stories about this, but it looks like he was being mistreated at the time —  a black mark on the Toledo post office forever, in my book.). And Owney’s body, like that of Sgt. Stubby, was taken to a taxidermist.  Today, Owney’s body is on display at the National Postal Museum.  The Museum’s  blog has a lot of excellent information about Owney, including an account of the conservation that made him “fuzzy” again.

I’ve been thinking quite a bit about these two dogs and the paths that led to their lives as mascots for communities of work — soldiers (it is a type of work) and postal workers.  Both dogs “worked” alongside men who found some company and, clearly, some pleasure in their presence.  All accounts seem to agree that both dogs seemed to know that they were special, that they had public lives beyond their lives as dogs.  And the uniforms with medal and bags are also interesting to compare.  Sgt. Stubby’s medals were military, while Owney’s uniform was covered with mail bag tags and custom medals created by the mail workers who knew him.

Taxidermy of pet dogs is, and was, relatively rare (despite all the stories I’ve been told over the years).  Doting pet owners were, and are, much more likely to spend money on a gravesite and tombstone than a mount of their beloved companions.  A mascot is something else, however, because it is a public symbol representing a community.  in a way, preserving the dog was preserving the community.

I’d be interested to know from readers of this blog whether there are other mascot dogs that have been turned into taxidermy mounts after their deaths.  In the meantime, I’m looking forward to seeing Sgt. Stubby: An American Hero — and to visiting both Stubby and Owney on my next trip to Washington!