We Will All Be at the Cat Show! 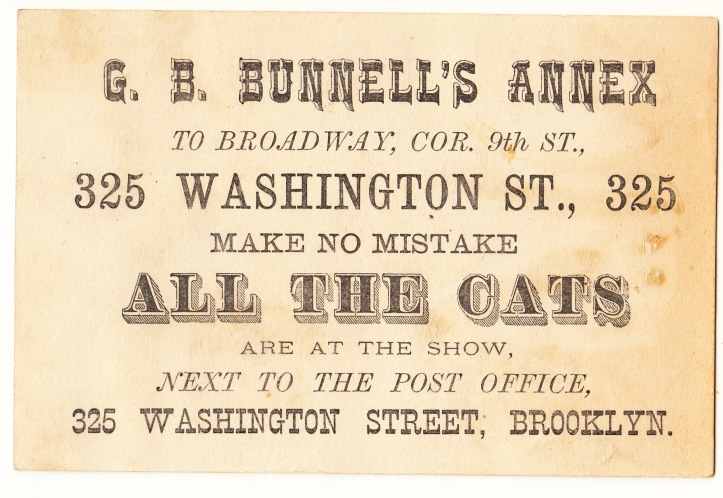 A while back I was able to purchase this trade card, which intrigued me because it was an early advertisement for a cat show.  I had never seen a trade card or broadside for a nineteenth-century cat show, and I decided that I needed to learn who G. B. Bunnell was, and when and why he held one.

“Exhibitions” or “Congresses” of cats, dogs and other small animals were a sideline of the for-profit museums that dotted American cities in the nineteenth century.  The most famous of these, of course, is P.T. Barnham’s American Museum, which burned in 1865.  In 1863, Barnum held, and promoted the dickens out of, the “Great National Dog Show,” which offered cash prizes.  After that, dog shows popped up in many settings, including local agricultural fairs (where dogs were shown alongside fancy poultry) and the Centennial Exposition in 1876.  By the 1880s dog breeding was organized through kennel clubs, the most important being the American Kennel Club (1884).  Dog enthusiasts quickly established breeding registries and standards for judging;  they imported dogs from Europe and even created new breeds of dogs such as the Boston Terrier.

Cat shows were another beast entirely.  By the early 1870s, newspapers reported on cat shows in Great Britain, which probably encouraged the organization of American events.  However, cats did not (and still don’t) come in a large variety of distinctive breeds.  Reportage on cat shows in the late nineteenth century reveals that they were mainly an attraction created by for-profit museums or charitable groups as fundraisers.  As I was tracking Mr. Bunnell, I found this brief article on a cat show in Philadelphia, printed in the Brooklyn Daily Eagle on 30 November 1877: “Philadelphia is enjoying a cat show.  The exhibition is being held at the Museum [another for-profit attraction], and the display is varied.  The competition is principally as to weight and age, and the largest weighing from fourteen to thirty pounds.  The ages of some run up to twenty years, and there are animals two yards long.”  That’s the entire article. It does suggest that some Americans were already feeding their cats much too much, however.  Shortly thereafter, the Daily Eagle reported bad news about a cat show at the American Museum in the Bowery: “There was nothing about any of them [the cats, that is] that particularly excited attention.”  G. B. Bunnell was the operator of this attraction, and this was his first run at showing cats.

By 1878, the Daily Eagle began to report on cat shows in Brooklyn. A cat show at the Music Hall in January of 1878 received coverage because there was “little of note” in the “world of amusements.” The 271 cats in this display were displayed because of “their large or small size, color and condition of fur, species, deformities, and so forth.”  Some were trained to perform tricks.

In March of 1881, TWO cat shows competed for the attention of Brooklynites, and this is where my trade card comes in.  On the 13th, James Jukes, manager of “Brooklyn’s New Museum” at 424-426 Fulton Street, announced the impending opening of a cat show including “some of the finest specimens of the feline species in this country.”  Jukes invited Brooklynites to enter their own pets in this display.  The next day, Jukes took out a classified advertisement announcing that his “Great Cat Show” would open on March 21.  Ten cents bought not only this display but a “pantomime of Puss in Boots”…”to amuse the children.”

Right below this ad, G. B. Bunnell advertised his “Annex” at 325 Washington Street in Brooklyn, starring “Signor Giovanni’s Performing Canaries and Musical Glasses” for a ten-cent admission.  Bunnell was apparently worried that Jukes’ “Great Cat Show” would outdraw the musical canaries, however, and on March 21, he opened his own cat show at the Annex. In fact, he imported specimens from a cat show he had opened at his Manhattan location on March 7.  That 180-animal show, which was covered by the New York Times in a very funny article on March 8, continued the “anything goes” approach to cat display:  “Tom is a tiger cat, weighing 18 pounds and valued at $150.  He…has the heavy chops and expression of untutored intelligence of a Tammany Alderman.”  The imports to the Brooklyn show were similarly various and included a couple of three-legged cats — and Tom, one hopes.

My trade card is part of the publicity for Bunnell’s recycled cat show.  It was a freebie, the kind of card that a young person would keep to put in a scrapbook along with the other chromo trade cards that puffed brands of coffee, over-the-counter medicines,sewing machines and shoe stores.

The terrific blog The Hatching Cat of NYC also discusses Bunnell’s museum and his 1881 and 1882 cat shows in more detail in this post of 28 February 2016:  Featured Felines of the Cat Congress on Broadway