Behold another of my unusual acquisitions — a 60-plus year old empty aerosol can!  Even as I work to de-clutter my own living spaces, I am grateful that so many Americans are such pack rats — or that they just can’t face that stuffed-full garage or basement workshop.  Their sloth is my gain — with a little help from flea markets, garage sales and online auction sites. ( Of course, my gain is also my ongoing storage problem….)

This can contained Dogzoff®, a popular repellent used by gardeners in towns and suburbs who wished to protect their prized shrubbery from blasts of dog urine.  The 1920s and 1930s were decades when the longstanding practice of letting dogs run free was challenged by changing attitudes toward the status of animals in towns.  These were the decades when family cows and backyard chickens were finally pushed out of many towns and cities by public health concerns, and wandering dogs and cats, but especially dogs, were also subject to renewed attention from the beefed-up ranks of animal-control officers — the dreaded dog-catchers. (1932 was the year that the Little Rascals films included one where Petey was nabbed by the dog catcher and almost “gassed” as an unwanted stray.)

Dogzoff® repellent was the first marketed in 1933, and it appears in newspaper advertising all over the United States by the mid-1930s.  “DOGS — keep them away from shrubs and flowers — Dogzoff will do it,” promised an ad from Kadotani & Son, Florists in the 7 April 1935 edition of the Santa Cruz Sentinel.  The company that made and marketed Dogzoff, Bohlender Plant Chemicals, Inc., was an outgrowth of the nursery business started by Bavarian immigrant Peter Bohlender (1837-1914) and continued by his family.

Peter Bohlender is an interesting fellow.  His obituary in the Florists‘ Review says that he came from a “family of gardeners” that arrived in Ohio when he was only six, and that he started first nursery when he was quite young.  In 1889, he relocated his growing wholesale business to Tippecanoe City (now Tipp City), Ohio, just outside of Dayton.  According to the obituary, Bohlender had been an advocate for Arbor Day, and he was able to pass on his sizable business, which included nurseries and orchards in Oklahoma, Missouri and California, to four sons and a son-in-law. By 1912, Peter Bohlender & Sons had been rechristened Spring Hill Nurseries, the name it operates under today, and it had begun to shift its operations to mail-order rather than wholesale.  What, Where, When and How to Plant, a 1913 booklet written by son E. E. Bohlender, focused largely on suburban gardens with illustrations of large houses with spacious grounds, and included plans for long perennial borders, small domestic orchards, evergreen wind breaks and plantings of ornamental shade trees.

This is another context for the Bohlender family’s experiments with repellents, although I have not been able to find out more  about the decisions that led to the product.   Middle-class householders now enjoyed gardening as a leisure activity rather than a requirement for provisioning the family, and their ornamental plantings were apparently under assault by their neighbors’ dogs.  This June 20, 1931, letter to the editor of the Muncie Evening Press sums up the position of these avid gardeners: 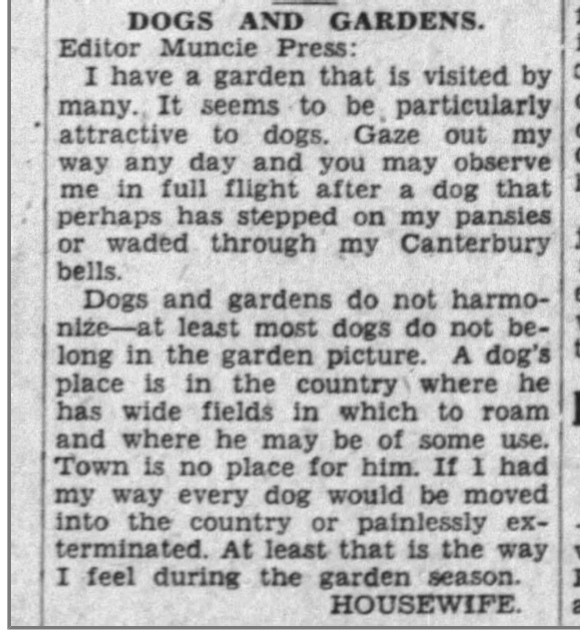 Dogzoff®, used mustard oil to irritate sensitive canine noses.  It was sold as a concentrate in a small bottle,  to be diluted and applied around the base of plantings using a hand-pump sprayer.   An instructional advertising flyer (below) pointed out that the solution also could be used to drive off rodents and keep cats away from birds (presumable nesting in the garden), but its primary use was to break dogs of “bad habits,” even away from the garden.  In the flyer, the repellent also cures dogs of dumping trashcans, chewing shoes and sitting on the porch furniture.

Putting Dogzoff® into an aerosol can made it possible for an outraged gardener (or shoe lover) to reach for the product on impulse, and it also made more money for the firm since the product was premixed and sold only in 11-ounce cans.  Aerosol cans have a complex history, and you can click on the link to take advantage of Wikipedia’s thorough article on the subject For our purposes, the important thing to know is that the “crimp-on” valve was developed in 1949;  it made possible the creation of low-pressure aerosol cans for household use.  During the 1950s, a decade of innovation and expansion in the pet products industry, aerosol flea sprays and dog shampoos also appeared on garden center and pet store shelves.  (These novelties are a subject for a post in the future.)

Dogzoff® had a sister product Mosquitozoff®, about which little is known at present.  I theorize that both products relied upon the oil from mustard seeds, and I have found recent recommendations for the use of mustard oil in both “green” mosquito repellents and one element of garden sprays. Mustard oil has a number of traditional medicinal uses, too.  It is used in anti-inflammatory ointments; women in India use it as a tonic that stimulates hair growth.

What I’m struck by in the advertising for Dogzoff is how candid the text is about shooting dogs.  I also found this in a number of letters of complaint about dog damage to gardens.  I wonder how many of these gardeners actually carried out summary execution, or whether it was mostly a devout wish.