Until amateur photography became easy and inexpensive enough that people were able to buy the camera and supplies, pet owners who wanted photographs of their animals had to bring them into photographers’ studios.

It’s astonishing just how many daguerreotypes, ambrotypes, tintypes, and cartes-des-visite of pet animals are out there, both in original family collections and in archives and private collections.   There clearly was unmet demand for pet portraits: as soon as daguerreotype studios opened, people began to bring in their dogs.  I don’t own any of these one-of-a-kind images, which cost too much for a collector with a limited budget like mine.  I discuss a couple of wonderful examples in Pets in America, including one where the owner had to tie his dog in a chair to get the pose he wanted.

With the exception of the tintype, these little photographs are all cartes-de-visite(2 1/2 by 4 1/2  inchese in size),  the first widely available form of photography printed on sensitized paper.  Introduced in 1854, the camera used in this process could take eight exposures from one sitting, and an infinite number of finely detailed contact images could be printed on sensitized paper, then pasted onto cards. The little boy with his small terrier was taken during the Civil War; I know this because it has a tax stamp on the back.  The subjects of these photos are unidentified, but the composition of the images tells us something about the relationships of the subjects.

In this relatively late cdv, the round-faced little girl with striped stockings is sitting on a box, while her dog has the chair! One thing that I always pay attention to when I look at photographs of people interacting with animals is proximity, especially the presence of touch, how close together the faces of the people and the animals are, and where they are looking.  I’ll talk more about this in subsequent posts.  In the meantime, how do you interpret the relationship in this photograph?

As exposure times decreased, people started to bring cats into photography studios.  Given how my cats feel about being carried to strange places, this required a particularly calm and confident feline subject.    Dick, “Warren’s cat,” is posed on top of a box.  I wish that I knew the context for the joke! 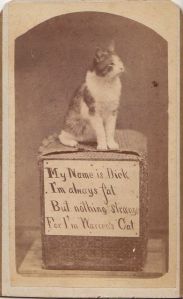