Getting Kitty High, part I 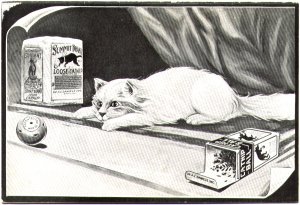 Now that catnip for people (recreational marijuana) is the topic of so much conversation, let’s think about why we get so much pleasure from helping our cats get a wicked buzz from a plant….

Catnip (botanical name, nepeta cataria) is native to Europe, where it has long been used as herbal medicine.  Its usefulness for treating fevers, sleeplessness, body aches and particularly digestive troubles is what inspired its cultivation in North American gardens.  A member of the mint family, it has now escaped from gardens and can be found growing along roadsides and in abandoned house sites.

Dried catnip was stocked in drug stores in the 19th and early 20th centuries, and it is still carried in health food stores, where you can buy it in bulk or bags to make tea.  It wasn’t marketed commercially for cats until just after 1900.  At that time, veterinary patent-medicine companies expanded from livestock remedies into a new market, medicines for pet animals, and started to sell containers of loose catnip.    The most famous of these is the Dr. A.C. Daniels Company of Boston, Massachusetts.  This picture of a very happy cat is from the back of a booklet on cat care the company published around 1920.  The hollow rubber ball filled with catnip is actually Walter E. Smith’s “Exerciser for Felines,” which received its patent on March 26, 1907.  A perforated rubber toy containing a “chamber” that could be filled with catnip, Smith noted in his patent that “the device is especially useful in enticing well-fed, fat, and lazy cats to take the necessary exercise to keep them in good physical shape.”  In other words, this was intended for an elite class of feline, the pet house cat.  (Most cats were still working for their livings as household pest management specialists.)

There are two current members of my household, Ruby and Alfredo, who are very grateful that I grow catnip in my garden.  I like it because the flowers attract a lot of bees, and the scent of the leaves is pleasant.  I try different ways to protect the young plants when I put them into the herb bed — milk crates turned upside down, small tomato cages, and raising the plants off the ground in pots, but nothing can fully protect them from hot kitty love except rapid growth.  (Here is a snapshop of a youthful Ed, who passed away a few years ago after a long and happy life, sitting in a pot of catnip.)  My stubby-tailed former barn cat Ruby likes to roll around on the plants with waving paws — and claws out — with eyes as big as saucers. I can’t weed near her or she’ll take a swipe at me! She soon dozes off, however.  Now that I think on it, catnip and marijuana do have similar stupifying effects, with sleepiness the usual outcome of ingestion following a period of euphoria.

In my next post on catnip. I’ll talk about the invention of the catnip mouse.